Products designed by our engineers meet stringent quality and safety criteria. Below we present selected signal samples from our products based on standard signal quality measurement methods.

There were 8 repetitions of the task with 20 seconds of the task itself and 43 seconds of rest periods between them. This is a measurement for a single channel localized between C3 (source) and CP3 (detector) optode positions. 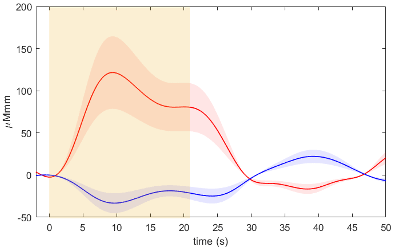 Motor imagery is defined as the mental simulation of a movement without any real action. Mental representation of a right hand movement evokes higher activation of motor cortex areas located on the opposite side of the head (contralateral) and lower activation of areas located on the same side (ipsilateral) (Fig. 3.). In the case of the BOLD response measured by fNIRS, greater activation corresponds to increased oxyhemoglobin levels and a decrease in deoxyhemoglobin levels. Our study results present a difference in the motor cortex activations registered in both hemispheres during imagined and real right-hand movement (Fig. 4.). 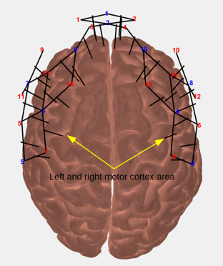 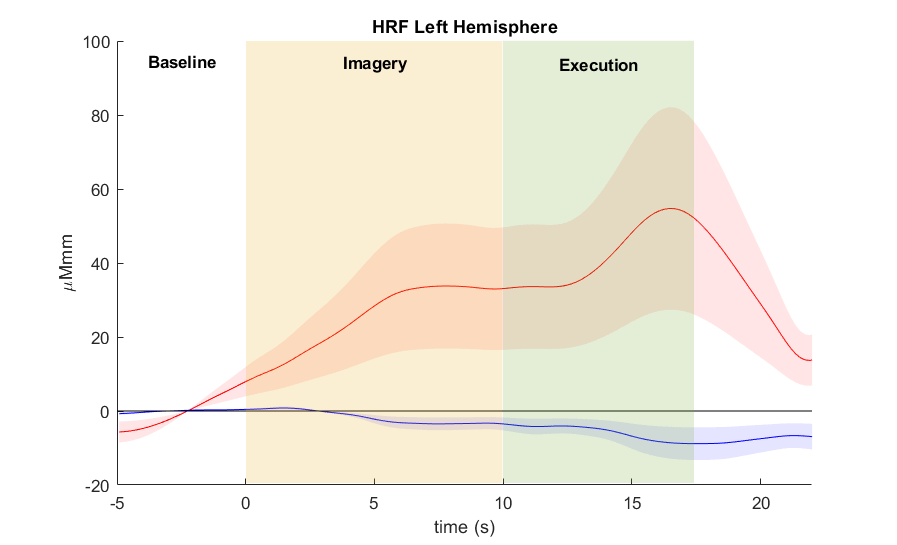 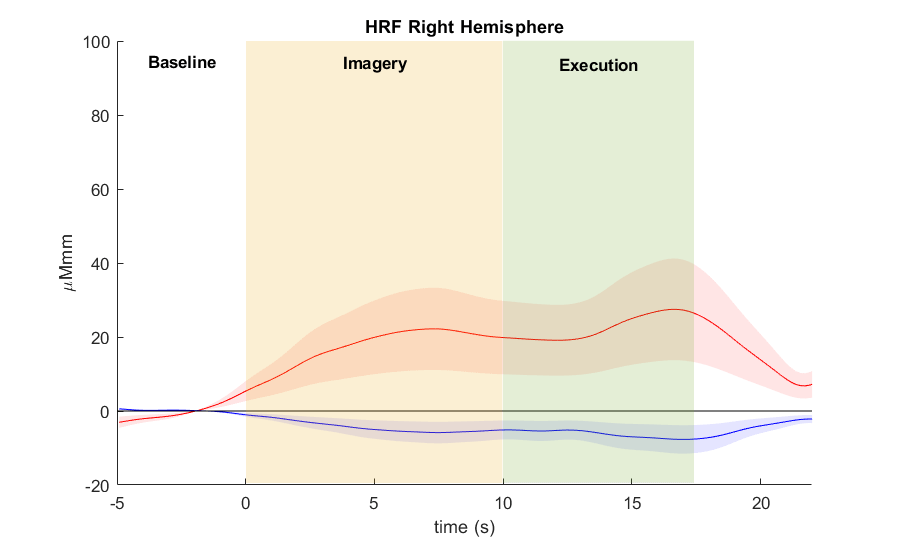 Fig 3. Localization of the fNIRS sources (red) and detectors (blue).

Fig. 4. The hemodynamic average (n=4) response during movement imagery and execution of right-hand movement over contralateral (left) and ipsilateral (right) motor cortices. Channel over the left-hemisphere (S7-D3) show increased oxy-Hb and decreased deoxy-Hb, interpreted as the activation of this area. A similar but smaller response has been observed on the opposite side of the head (S8-D4).

Source-detector separation distances for up to 60 mm

We use cookies on our website to give you the most relevant experience by remembering your preferences and repeat visits. By clicking “Accept”, you consent to the use of all the cookies.
Cookie settingsACCEPT
Manage consent

This website uses cookies to improve your experience while you navigate through the website. Out of these, the cookies that are categorized as necessary are stored on your browser as they are essential for the working of basic functionalities of the website. We also use third-party cookies that help us analyze and understand how you use this website. These cookies will be stored in your browser only with your consent. You also have the option to opt-out of these cookies. But opting out of some of these cookies may affect your browsing experience.
Necessary Always Enabled
Necessary cookies are absolutely essential for the website to function properly. This category only includes cookies that ensures basic functionalities and security features of the website. These cookies do not store any personal information.
Non-necessary
Any cookies that may not be particularly necessary for the website to function and is used specifically to collect user personal data via analytics, ads, other embedded contents are termed as non-necessary cookies. It is mandatory to procure user consent prior to running these cookies on your website.
SAVE & ACCEPT
Font resize
Contrast version
Accessibility by WAH